President Obama’s tax proposal to favor mothers who leave the home (and their children) to be part of the workplace is a recent manifestation of attempts made by both socialists and capitalists to detach the famous “hand that rocks the cradle” from the cradle, and so give birth to the new detached “citizen.” President Obama should have read Becoming Attached, a rare social science book. The author, Robert Karen, is an award-winning journalist (with two cover stories in Atlantic Monthly―“Shame”and “Becoming Attached”―to his name) as well as a clinical psychologist with a practice in New York City. His ability to write with journalistic flair and professional insight makes the book a delight to read.

Using social science, the author illustrates the centrality of the role of stable attachment figures (the mother in particular) for the overall well-being of a child. For a child, the earliest relationship with one’s mother serves as the building block of relationships, shaping the structure and patterns of one’s inner emotional life and outward relationships for the rest of one’s life. The attachment pattern established at childhood―be it attached, avoidant, or insecure―affects relationships with friends, spouses, future children, and ultimately God, if it is true that “grace builds on nature.” The child who has the wonderful experience of a mother who is deeply and daily present to the changing needs and circumstances of the child has a mother who communicates implicitly: “I welcome you wholeheartedly into this world and I want you to feel totally at ease in it.” As a result, it will be this child, who will be more able to stand on his own two feet and tackle life with confidence.

The book is a tour through the history, science and practice of attachment theory, in the personal company of those who shaped the field. You will get to know the founder John Bowlby, of Cambridge, and his pupil Mary Ainsworth of Johns Hopkins and the “Strange Situation test” (where one’s type of attachment was ascertained). You will discover Bowlby’s psychoanalytic social work colleague, James Robertson, who upended the hospital treatment of young children, the not-so-attaching Anna Freud and Melanie Klein, and the monkey-loving Harry Harlow of Wisconsin. Additionally, you will meet the work of the second generation of attachment theorists: Everett Waters and Alan Stroufe who brought field-altering contributions from other non-social science disciplines and went on to make the University of Minnesota one of the capitals of attachment theory. It is precisely the personal quality of the book that makes it so enjoyable.

The bottom line implications of attachment theory―and its subsequent research―is thus: early infant attachment is the relational building block of well-functioning families, marriages and societies. If this be so, then with all the current absence of real attachment, we are headed into a more and more insecure and avoidant society. The good news is that we now know how to help insecure and avoidant mothers break this cycle for their newborns.

At the highest levels of thought, Vatican II moved the dialogue between theology and philosophy to a new “trialogue,” which included anthropology. To those engaged in this new meeting of traditions, attachment theory offers wonderful bridges to a myriad of topics. It is a way of looking at the natural interior life of man, how it is formed and how dependent it is on the love of others.

To belong may be the deepest attribute, definitely the most personal, of the Three Divine Persons. No persons belong to each other as the Divine Persons do. And yet, made in Their image and likeness, we too are made to belong. The more we live in a belonging way the more fully human we are, and the happier we are. With attachment theory, the Christian doctrine received a sort of anthropological confirmation. It seems the Trinity may have replicated something of its own dynamic relationship in man’s relationship with man, first and foremost through man’s relationship with his mother.

In contrast to the underlying deprecation of those who “rock the cradle” hidden in every tax proposal which encourages women to leave their babies, attachment theory suggests otherwise. Dedicated motherhood, especially in the early years, would be the rather enviable “job” of attaching one’s child to their deepest roots. And everything is at stake here: unattached citizens are more easily manipulated by materialist governments (socialist or capitalist). The attached are better grounded in reality, common sense and will more confidently demand justice.

Patrick F. Fagan, Ph.D. in Dip. Psych, is Director of the Marriage and Religion Research Institute (MARRI), a social science institute studying the impact of marriage, family and religion on children, adults and society in general. 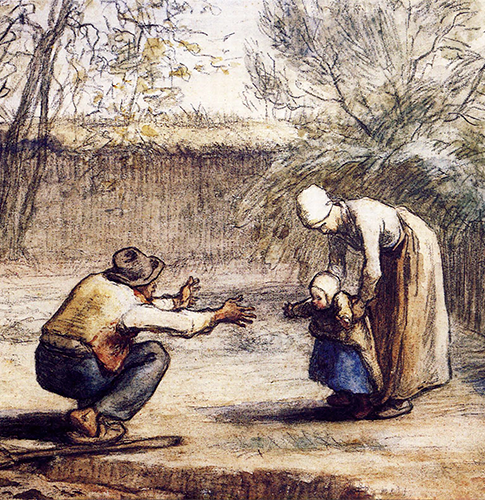