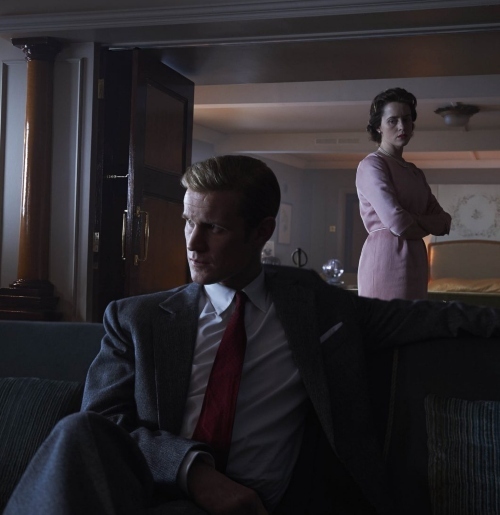 Marriage and the Monarchy

Although the title of Peter Morgan’s The Crown suggests a story about the monarchy and politics, the driving force of the Netflix original series is marriage. And, considering how the latest season ended with the breakdown of the marriage of Prince Charles and Princess Diana of Wales, it is beneficial to explore the theme of marriage thus far in the series, in order to enter thoughtfully into the anticipated fifth season’s treatment of the subject this coming fall.

The first two seasons of The Crown treat the early years of Queen Elizabeth II’s (the unparalleled Claire Foy) reign and focus on the tension it introduces to her new marriage with Prince Philip (Matt Smith). These early seasons also bring the question of the unity of marriage to the fore with the thwarted attempt of Elizabeth’s sister, Princess Margaret, to marry divorcee Peter Townsend. With an entirely new cast, Seasons 3 and 4 explore the new stability between the matured Elizabeth (Olivia Colman) and Philip (a superb Tobias Menzies), the divorce of Margaret and Lord Snowden, and the troubled marriage between Prince Charles and Diana Spencer. Season 5 is expected to deal with the divorce of Charles and Diana and her untimely death in 1997.

For Morgan, marriage is the concrete way of approaching the themes of the ideal and the real inherent within the monarchy. In Season One, Queen Mary explains to the young Queen Elizabeth that monarchy is an ideal given to ordinary people “to strive towards, an example of nobility and duty to raise them in their wretched lives” (Episode 4, “Act of God”). Remarkably, Morgan unfolds this question of the ideal and real by drawing a link between the ideal of the monarchy and the ideal of marriage as an indissoluble union between two people. This first comes to a head in the opening of Season Two, in which the troubled marriage between Elizabeth and Philip hits a breaking point:

Elizabeth: Look, I realize this marriage has turned out quite different to what we both imagined—

Elizabeth: And we find ourselves in a—

Elizabeth: A situation, that is unique. The exit route which is open to everyone else—

Elizabeth: Yes, divorce, is not an option for us. Ever.

Elizabeth: So, what would make it easier for you, to be in, not out?

Elizabeth and Philip understand that their role in the monarchy demands the unity of their marriage. An older Elizabeth explains this later in Season 4 to her wayward son Charles and his unhappy wife, Diana: “Something as important as the marriage of the future monarch simply cannot be allowed to fail. Your marriage, all our marriages, are a reflection on the integrity of the Crown, and if they show cracks, that they cannot be relied upon, then the constancy and stability that the monarchy is supposed to represent is called into question too” (Season 4, Episode 9, “Avalanche”). The integrity of marriage may be a reflection of the Crown, to be sure, but the reverse is equally true for Morgan: the ideal that the Crown represents is a reflection of the unity of marriage.

In proposing both marriage and the monarchy in terms of the ideal and the real, Peter Morgan is asking the question that cuts to the heart of modernity—namely, is the ideal real?

Morgan explores the ideal of marriage primarily through examining two marriages in crisis. In the first two seasons, it is the marriage of Elizabeth and Philip. Elizabeth’s early ascension to the throne brings strain upon the young couple, and the insecurities and immaturity of Prince Philip, along with the young and inexperienced Elizabeth suddenly thrust into becoming head of the Commonwealth, lead to significant problems for the two. After the moment of reckoning that opens Season Two, Morgan details how the couple arrived at this point, how they tried to resolve the crisis “realistically” through the compromises they each demand (Philip, the title of prince, and Elizabeth, more children), and how they again find themselves at a moment of crisis in Episode 10 (“Mystery Man”). But this time, instead of compromises and the expectation of realism, something quite different happens. In a moment of honesty and conversion, Philip says to Elizabeth, “You are the essence of my duty,” finally accepting that his service to the whole, his place in the world, is to love and support Elizabeth, and he commits to it. To which Elizabeth responds:

Elizabeth: We are both adults. And I think we are both realists…. We both know that marriage is a challenge under any circumstances. So, I can understand if, sometimes, in order to let off steam, in order to stay in, you need to…do what you need to do. I can look the other way.

Philip: Yes, I know you can look the other way…. I’m saying, I don’t want you to. You can look this way. I’m yours, in, and not because you’ve given me a title or because we’ve come to an agreement, but because I want to be, because I love you.

In both these moments, Elizabeth and Philip recognize that their duty, as Queen and Prince, lies in living the ideal of marriage. Whereas, in the first instance, they attempt to do this through compromise and will, in the second instance, they allow the ideal to take root in them. This scene ends with them in a silent embrace, followed by the singing of the Great Amen, as the two welcome their fourth child and have him christened. Morgan’s beautiful treatment of their marriage shows the potential of the ideal of marriage as something greater than just the fruit of two wills. He even suggests that the ideal of the monarchy ultimately ought to be like marriage, as the stability of Elizabeth and Philip’s marriage becomes the bedrock that stabilizes the drama in Seasons 3 and 4.

In Seasons 3 and 4, however, Morgan seems to betray the vision he proposes for marriage at the end of Season 2 through the way he chooses to portray another troubled marriage. The heavy-handed treatment of the marriage of Prince Charles and Lady Diana Spencer could not be more different than what we find in Seasons 1 and 2. Whereas Elizabeth and Philip’s marriage is approached more within the parameters of respectful historical fiction, the handling of Charles and Diana’s marriage feels more like vulgar voyeurism. Artistic liberties are certainly allowed in any work of historical fiction, but there comes a point when historical fact is left so far behind that the dramatic rendering is not merely disrespectful but actually becomes a mouthpiece for the creator’s feelings on the subject. The marriage of the real Diana and Charles was undoubtedly troubled and complex, but it is an oversimplification on Morgan’s part to assign the blame wholly to the monarchy. It’s also unbelievable that Charles and Diana only liked each other for three days in their whole relationship during their Australian tour, as the show suggests. And it’s disingenuous to blame Diana’s eating disorder and other psychological issues solely on Charles and the Royal Family.

Of course, Morgan paints their marriage in this way and takes the liberties he does in order to make a point, which is that the ideal of marriage—as with the aspirations of the monarchy—is not always realistic. As Charles and Diana are robbed of all freedom and consent to marry in the show’s account and all blame for the failed relationship is placed on the Royal Family, Morgan suggests that the ideal of marriage can be unkind and even villainous. This is furthered in his depiction of Diana as the innocent, hunted victim (or stag, if one wants to stay with Morgan’s overdone imagery) of a desperate monarchy, to the point that he even dares to suggest as true the conspiracy theory that Prince Philip was behind Diana’s death in 1997 (“War,” Episode 10). This depiction of Diana as victim of the monarchy, however, robs Diana of her true agency, depth, and complexity. One hopes that Season Five will show greater nuance towards the themes and the persons in question, for instance, showing Diana in light of her own parents’ particularly ugly divorce, a fact that is not once referred to in Season 4.

The disparity between Morgan’s treatment of Charles and Diana’s marriage and Elizabeth and Philip’s marriage is so great that it leaves the viewer with the impression that Seasons 1 and 2 and Seasons 3 and 4 are two entirely different series. While it is true that each couple is very different and the origin of each of the two marriages is very different as well (one being a marriage for love, and the other for duty and naïve illusion), the drastic change in tone and the victimization of Diana and, to an extent, Charles, draws out an inconsistency in Morgan’s thought. Yet, even with this incongruence, the fact that Morgan raises the question the way he has is what makes The Crown such a compelling series. In proposing both marriage and the monarchy in terms of the ideal and the real, he is asking the question that cuts to the heart of modernity—namely, is the ideal real? But it is precisely here that the heart of Morgan’s inconsistency becomes clear. He sees the relationship between the ideal and the real to be antagonistic, as either the ideal or the real. This is present throughout the series, namely, in how Elizabeth must suppress her individuality and happiness to represent the Crown, but it asserts itself at the end of Season 4 with all its force. For Morgan, we can only affirm the ideal—marriage—by suppressing individuality, subjectivity, and happiness, and as Season 4 closes on the tear-filled eyes of Diana, the judgment Morgan has made seems all too clear. But even so, Morgan’s treatment of the reconciliation between Elizabeth and Philip in Season 2 seems to suggest the opposite. Perhaps Morgan’s thought on the subject is complicated; perhaps he will resolve everything into some coherence with the final two seasons yet to be released. But unfortunately, it seems likely that this series, with all its promise and distinctiveness, will be yet another bland reiteration of modernity’s prioritizing of the individual above all else.

Carly Henderson is a wife and mother of two and a sessional instructor at Catholic Pacific College in Langley, British Columbia. She received her Ph.D. from the Pontifical John Paul II Institute in 2019.