One of Saint John Paul II's great contributions to Catholic social teaching is Laborem exercens, his encyclical on human work. It was promulgated in 1981 and is available in its entirety on the Vatican website. The excerpts that follow serve as an introduction to his thought on the meaning and dignity of work.

Through work man must earn his daily bread and contribute to the continual advance of science and technology and, above all, to elevating unceasingly the cultural and moral level of the society within which he lives in community with those who belong to the same family. And work means any activity by man, whether manual or intellectual, whatever its nature or circumstances; it means any human activity that can and must be recognized as work, in the midst of all the many activities of which man is capable and to which he is predisposed by his very nature, by virtue of humanity itself. Man is made to be in the visible universe an image and likeness of God himself, and he is placed in it in order to subdue the earth. From the beginning therefore he is called to work. Work is one of the characteristics that distinguish man from the rest of creatures, whose activity for sustaining their lives cannot be called work. Only man is capable of work, and only man works, at the same time by work occupying his existence on earth. Thus work bears a particular mark of man and of humanity, the mark of a person operating within a community of persons. And this mark decides its interior characteristics; in a sense it constitutes its very nature.

God’s fundamental and original intention with regard to man, whom he created in his image and after his likeness, was not withdrawn or cancelled out even when man, having broken the original covenant with God, heard the words: “In the sweat of your face you shall eat bread” (Gen 3:19). These words refer to the sometimes heavy toil that from then onwards has accompanied human work; but they do not alter the fact that work is the means whereby man achieves that “dominion” which is proper to him over the visible world, by “subjecting” the earth. Toil is something that is universally known, for it is universally experienced. It is familiar to those doing physical work under sometimes exceptionally laborious conditions. It is familiar not only to agricultural workers, who spend long days working the land, which sometimes “bears thorns and thistles” (Heb 6:8; cf. Gen 3:18), but also to those who work in mines and quarries, to steel-workers at their blast-furnaces, to those who work in builders’ yards and in construction work, often in danger of injury or death. It is likewise familiar to those at an intellectual workbench; to scientists; to those who bear the burden of grave responsibility for decisions that will have a vast impact on society. It is familiar to doctors and nurses, who spend days and nights at their patients’ bedside. It is familiar to women, who, sometimes without proper recognition on the part of society and even of their own families, bear the daily burden and responsibility for their homes and the upbringing of their children. It is familiar to all workers and, since work is a universal calling, it is familiar to everyone.

And yet, in spite of all this toil—perhaps, in a sense, because of it—work is a good thing for man. Even though it bears the mark of a bonum arduum, in the terminology of Saint Thomas, this does not take away the fact that, as such, it is a good thing for man. It is not only good in the sense that it is useful or something to enjoy; it is also good as being something worthy, that is to say, something that corresponds to man’s dignity, that expresses this dignity and increases it. If one wishes to define more clearly the ethical meaning of work, it is this truth that one must particularly keep in mind. Work is a good thing for man—a good thing for his humanity—because through work man not only transforms nature, adapting it to his own needs, but he also achieves fulfillment as a human being and indeed, in a sense, becomes “more a human being.”

Since work in its subjective aspect is always a personal action, an actus personae, it follows that the whole person, body and spirit, participates in it, whether it is manual or intellectual work. It is also to the whole person that the word of the living God is directed, the evangelical message of salvation, in which we find many points which concern human work and which throw particular light on it. These points need to be properly assimilated: an inner effort on the part of the human spirit, guided by faith, hope and charity, is needed in order that through these points the work of the individual human being may be given the meaning which it has in the eyes of God and by means of which work enters into the salvation process on a par with the other ordinary yet particularly important components of its texture.

Keep reading! The next article in this issue is Finding the Eternal in Our Daily Toil an excerpt from Charles Péguy’s The Portal of the Mystery of Hope. 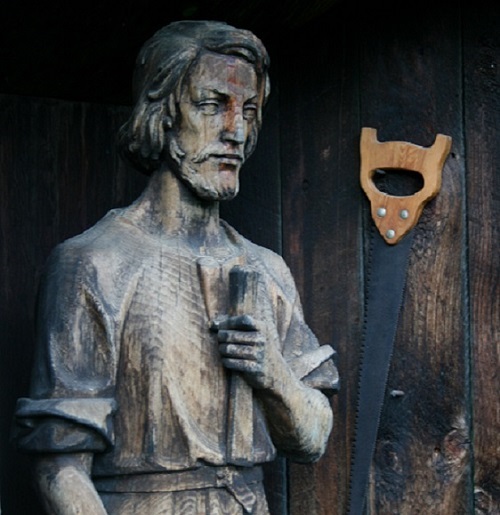