This is an excerpt from Charles Péguy’s The Portal of the Mystery of Hope (Trans. David Louis Schindler, Jr. [Grand Rapids, MI: William B. Eerdmans Publishing Co., 1986]: 15‒22). It is published here with permission and available for purchase in its entirety on the publisher’s webpage. Our “All You Who Labor” issue featured an excerpt from this same work of Péguy’s: “Finding the Eternal in Our Daily Toil.”

The Portal of the Mystery of Hope, first published in 1912, is Charles Péguy’s most famous prose-poem. Going through over sixty editions in the last hundred years, it gives voice to the French socialist’s profound conversion to the Catholic faith, anchored in a vision that married eschatological vision with a deep sense of social realities. For Péguy,“the little girl Hope” is the most dynamic of the three virtues, enabling Faith and Charity to reach those parts of the humanity which a merciful God desires to plumb. The virtue of hope was of especial relevance to Péguy himself, whose personal circumstances prevented him from receiving the very sacraments around which his poetic vision revolved. Few poets have meditated so deeply on the meaning of human work, and he remains the poet of the disenfranchised and the dispossessed: those who might be tempted to despair at the futility of everything they do.

What is above everything.

God’s blessing, which is on his house and on his ancestors.

The grace of God, which is worth more than anything.

He can be sure of this.

Which is on the poor man and on the working man.

And on him who raises his children well.

He can be sure of this.

Because God promised it.

And because he is supremely faithful in his promises.

His three children who are growing so much.

Provided they don’t get sick.

And who will certainly be bigger than he is.

(How proud he is of this in his heart.)

And his two boys will be awfully strong.

His two boys will replace him, his children will take his place on earth.

When he is no longer here.

And on the plains and on the hill and in the valley.

His place in Christianity. After all.

His place as farmer.

His place as father.

His place as a son of Lorraine and of France.

Because these are the places, great God, that must be taken.

All of this must go on.

When he is no longer here as he is now.

If not get better.

The work around the farm must go on.

And the vine and the wheat and the harvest and the vintage.

And the tilling of the soil.

And the pasturing of the animals.

When he is no longer here as he is now.

If not get better.

Christianity must go on.

And for that you need Christians.

France and Lorraine must go on.

As well as they are now.

children will take his place.

Of that time when he will be no longer and when his children will be.

And when they say his name in town, when they talk about him, when

his name gets brought up, at some chance remark, it will no

longer be him that they talk about but his sons.

name, since it will be (will have become) his sons’ name.

That he will no longer be himself but his sons.

And that his name will no longer be his name but his sons’ name.

That his name will no longer be at his service but at his sons’ service.

Who will bear the name honestly before God.

they’ll be talking about.

He’ll have long been in the cemetery.

Lined up with them.

With his father and his grandfather that he knew.

And with everyone else, all those that he didn’t know.

All the men and women of his lineage.

His ancestors and forefathers.

As many of them as there have been since the parish was founded.

By some founding saint.

His body, because his soul he will have a long time ago.

Putting it under the protection of his patron saints.

He will sleep, his body will thus rest.

Among his own, (awaiting his own).

Awaiting the resurrection of the body.

Until the resurrection of the body his body will thus rest.

He thinks tenderly of the time when he will no longer be needed.

And when things will go on all the same.

Because there will be others.

Who will bear the same responsibilities.

And who will perhaps, and will undoubtedly, bear them better.

He thinks tenderly of the time when he will be no longer.

Because you can’t be forever, can you.

You can’t be and have been.

And when everything will go on all the same.

When they will not go any worse.

When things will only get better.

Because his children will be there, for a while.

His children will do better than he, of course.

And the world will go better.

He’s not jealous of it.

Nor for having come to the world, as he did, in an ungrateful time.

Doesn’t he work solely for his children.

him except because of his children.

(If they only think about him occasionally. Rarely.)

When his name resounds (warmly) in town, it’ll be because someone is

calling his son Marcel or his son Pierre.

It’ll be because someone needs his son Marcel or his son Pierre.

And is calling them, happy to see them. And is looking for them.

Because it’s they who will rule then and who will bear the name.

It’s they who will rule with their peers, those from the same generation.

It’s they who will reign on the face of the earth.

Perhaps for some time still, an old man who remembers

It runs in the family.

Their father was such a good man.

And after a while the young will repeat with confidence:

The old man was such a good man.

But already they’ll know nothing about it.

They’ll no longer know then, and the comment itself, the very remark

It’s to this end, it’s for this that he works, because doesn’t one always

But his children will be.

He tenderly greets the new time when he will be no longer.

When he will have ceased to be.

When his children will be.

The reign of his children.

He thinks tenderly of the time that will no longer be his time.

But his children’s time.

His children’s reign (of time) on earth.

In that time, when they say The Sévins it won’t be he but they.

Nothing more, without explanation.

His children will bear the name Sévin.

other name from Lorraine.

Any other Christian name, or French name, any name from Lorraine.

At the thought of his children who will have become men and women.

A tenderness, a warmth, a pride swells in his breast.

(My God, could that be Pride

But God will forgive him.)

How strong and brave his sons will be in the forest, great God.

Boys as solid as oaks

In the forest when the winter wind blows.

That will cut to their bones.

And make icicles in their beards.

He laughs when he thinks what they’ll look like.

He laughs to himself and perhaps even openly.

When he thinks what they’ll look like when they have beards.

As for him, it’s understood, he’ll be no longer.

He’ll have lost his taste for bread.

into a good crust of bread.

Who will eat heartily.

Who will eat heartily their daily bread and their eternal bread.

(They’ll manage very well without him, and he’ll no longer sit at table,

because one must get up from the table when the newcomers

arrive and nudge one aside.)

after him if all proceeds in the right order.

And whom he’ll see again in heaven.

And his wife who stayed home today.

But who otherwise usually goes to the fields too.

Who is such a good homemaker.

And such a good Christian.

Would she be as willing to work.

And do the housework.

If she weren’t working for her children.

Thus, without exception, all the world works for the little girl hope.

All that we do we do for children.

And it’s the children who make it all get done.

All that we do.

As if they led us by the hand.

Keep reading! The next article in this issue is, In Search of the Household by John Cuddeback. 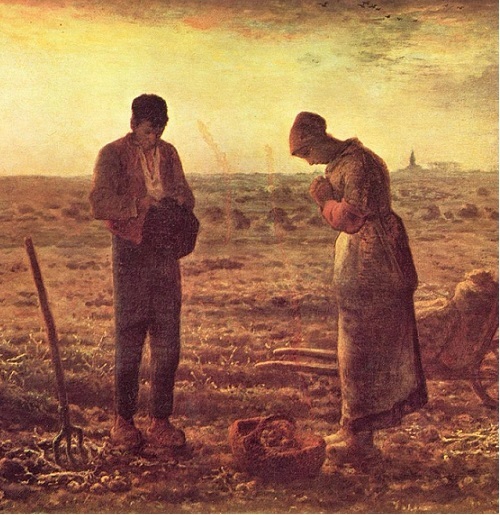