The Catholic Worker Movement began in 1933 in New York City as an attempt to embody Leo XIII’s call in Rerum Novarum to put the social principles of the Church into action in the bleak social conditions following the rise of industrialism. The movement had three practical components: hospitality houses for the poor and homeless, roundtable discussions for the clarification of thought, and farming communes. This vision, and its theological analysis of the social order, originated with Peter Maurin, who taught it to Dorothy Day, who in turn articulated its application extensively in her writings. It is difficult, indeed, to separate the work of these two saintly co-founders, vastly different though they were. Because of the close connection between their work, a particularly poignant sketch of their unique vision is found in Day’s biography of Maurin, Peter Maurin: Apostle to the World.

The first thing we notice in this work is that the Catholic Worker vision must be grasped as a seamless whole that centers around Maurin’s threefold synthesis of what he called cult, culture, and cultivation. By cult, he meant the Mass; by culture, the forms of human life built around it; and by cultivation, the necessary place of small-scale agriculture in any Catholic culture. “Cult, culture, and cultivation” is thus the Catholic Worker way of talking about a whole way of life that is derived from the Eucharist. Because Maurin and Day believed the center of the divine life in this world is the Mass, they also thought that an authentically Christian life—including work that is good and just—is never more or less than an extension of it. This is because, at the most basic level, the Mass requires bread, wine, and human beings for its celebration. Therefore wheat and grapes, as well as whatever food is necessary to sustain human life, will have to be cultivated around the altar. But so will culture: we will want a roof to shelter the celebration from the elements, and we will want the celebration adorned with the beauty of flowers, candles, and icons.

Human work, then, as a part of cult and cultivation, is to be evaluated by how well it is integrally connected to the Eucharist. As such, the work that is a part of all human life—culture and cultivation—is good and just work to the extent that it “fits with” the Opus Dei (Work of God)—the Church’s liturgy. The problem with modern thinking about work, thought Day and Maurin, was that we do not have “a philosophy of work” (81)—we have no definition of what real work is. The industrial age defines work as bare “activity,” or as anything that receives remuneration, and so there is no way to sort out what is good work and what is not. But for Day and Maurin the Liturgy, as the revelation of all that is “right and just,” gives work moral criteria by its very performance. As such, work that is organically connected to the perpetuation of the Mass, such as that which directly supports human life, is better than work that is not. As Day put it, good work is the extension of the human hand, rather than the extension of a machine (since machines do not assist at Mass). Just work serves the Mass rather than perpetuates a further extension of the machine. Of course, in practice there will be many different shades of grey, but the basic thing that was lacking in a philosophy of labor―a telos for human work―is supplied by the most fundamental element of creation: the Creator’s Body and Blood itself.

Evaluated by this standard, Day and Maurin knew, industrial work failed. Their newspaper and movement thus took the name the Catholic Worker, because the most blatantly obvious way that industrial work fails the “Eucharist test” is that it has produced, in comparison with all previous epochs, unparalleled levels of unemployment, poverty, and destitution. The severing of cultivation and culture from cult produces dire human consequences. It was to those impoverished by industrialization that the Catholic Worker was to go directly, both to alleviate their immediate plight by offering free and no-strings-attached hospitality, and to cut to the root of the industrial problem by getting “back to the land.” Both of these activities, however, were designed to address the fundamental injustice of modern work due to its separation from the Church’s liturgical life. Houses of hospitality were not, in the first instance, designed to “meet needs,” as much as to enable the practice of the works of mercy at a personal sacrifice, for the goal of allowing the Church to practice the cultivation of the virtue of charity. Likewise, the humble work of farming communes was not, in the first instance, conceived as an immediate solution to America’s poverty problem (though, Maurin thought, it could actually be such), but as a way of connecting work to the direct sustenance of our bodies―more closely uniting work and worship. They often appealed to St. Benedict’s motto ora et labora in this regard.

Day thus stresses that in his synthesis Maurin had in fact developed a comprehensive and entirely Catholic alternative to the major political and social visions of organizing life available in the early 20th century, namely communism/socialism or liberal capitalism—the two major alternatives still with us today. Indeed, neither Maurin nor Day thought that they were involved in anything other than the natural extension of the Church into all areas of life: as Day recounted, “to reach the man in the street—that was Peter’s first step.” The goal here would be a decentralized society with widespread ownership of the means of production, a society where everyone holds very loosely to the notion of “property.” As models for the various forms of political society compatible with this vision, Day and Maurin offered the early Christian community described in Acts, the Benedictines, and the Franciscans.

It is against this ideal that all forms of “industrial” work were to be evaluated and from which were generated the Catholic Worker’s famous critiques of the degrading nature of factory labor and the inequitable, inhuman nature of modern technological labor in general. Indeed, this was not really “work” anymore. The Catholic Worker’s “activism”—participation in strikes, unions, protests―is then to be seen as the attempt to move such labor in the direction of authentically good work. These were attempts to “build a new society within the shell of the old, with the philosophy of the new, which is not a new philosophy but a very old philosophy, a philosophy so old that it looks like new.” This “Catholic philosophy” of the Worker—as indeed was the case with Rerum Novarum itself—was likely to be misunderstood, and indeed it was. It had a communitarian aspect that was labeled as communist, but it also had a place for property, which some called bourgeois. But, for Day, to be on the picket line and to insist on the right of private property went hand in hand. These were neither communist nor capitalist activities, but Catholic ones.

For these reasons, then, much of Day’s writing is devoted to critiquing unjust instances of post-industrial work in America. A living wage, safe working conditions, and job security are worth pursuing as a way of trying to reform present work to be more nearly just and good, precisely because the Church has a picture of what “just” and “good” means in its Eucharistic communities. Yet, as Maurin emphasized, finding good work to do did not in fact depend upon “reforming the system,” for even now there is no shortage of good work. One can perform the works of mercy at a personal sacrifice anywhere. The most radical thought of the Worker regarding work is that if in fact one would shun bad work and take up full-time the good work that is never lacking―providing hospitality for the poor and making your living directly from the soil―then God would provide in abundance and that justice would in fact spring forth upon the earth.

Of course, turning one’s back on the industrial-technological complex, today even more than ever, is likely to entail the voluntary poverty that has always been one of the Worker’s hallmarks. Yet poverty, Maurin thought, was exactly what the saints loved, so why can’t we—even families and laity—love it now? “Every house should have a Christ-room”—a place for the poor and homeless. Such radical Catholicism, of course, takes the perhaps unreasonable and certainly unpopular position that what we say at the Mass and what we read in the Sermon on the Mount is actually true. “Unless we are putting these social ideas into practice…we are using religion as an insurance policy.” This is not least because, at the end of the day, for Maurin and Day just work is in fact conditional, not upon having the proper governmental regulations and laws in place, or identifying “unjust power structures,” but on each Christian’s personal responsibility to put into practice Jesus’ words to love our neighbors as ourselves.

Colin Miller is Assistant Professor of Catholic Theology at DeSales University, and a candidate for the Catholic priesthood in the Personal Ordinariate of the Chair of St. Peter ("Anglican Rite"). He formerly lived in the Peter Maurin Catholic Worker House in Durham, NC.

Keep reading! Click here to read our next article, Another Kind of Exchange: The Gift of Self. 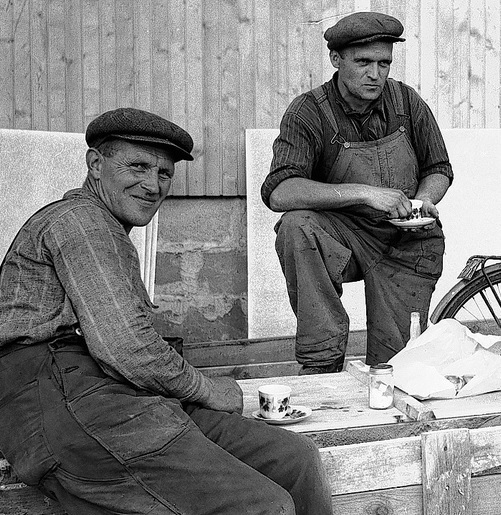