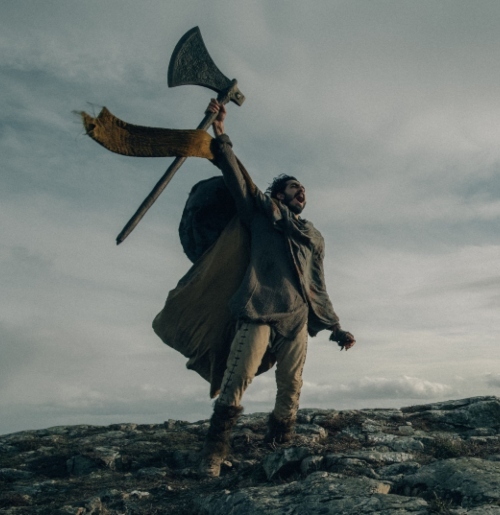 Gawain, the Green Knight and the Choice between Witchcraft and Sacrament

“Look, see a world that holds more wonders than any since the earth was born . . .”

So begins writer and director David Lowry’s The Green Knight, an adaptation of the 14th century Arthurian legend, Sir Gawain and the Green Knight. This first line establishes the theme that animates the film: that our world is stranger than we can ever fathom, full of mystery and enchantment, and it is how we respond to this mystical order that occupies our lives.

One of the great poverties of modern times is the disenchantment of our world. Many incorrectly lay this demystification of the cosmos at the feet of the Church, but one only need to know a little history or literature to see that this is manifestly untrue. Pre-Enlightenment literature is overflowing with symbols, mystery, and enchantment, which is perhaps no clearer than in Arthurian legends that take the meaning of things to be something gravely serious. In the Arthurian legends, natural phenomena are never merely natural, but are endowed with the power to point to a world beyond themselves, a world that is nonetheless wholly interwoven with the immediately sensible.

The chivalric romantic poem Sir Gawain and the Green Knight may be one of the weirder Arthurian tales, at least to our modern eyes: In Camelot on Christmas Day, the knights of the round table are gathered making merry when King Arthur asks for a story of adventure and courage. Just then an enormous knight—his person and horse entirely green—enters the hall. He issues a challenge: someone is to strike him once on the condition that he will return the same blow on his challenger in a year’s time at the green chapel. At first, none of the knights respond, but then the youngest and most inexperienced knight, King Arthur’s nephew Gawain, asks for the honor. Gawain beheads the green knight, who promptly picks up his bleeding head, reminds Gawain of his future return, and rides away. The rest of the tale narrates Gawain’s enjoyment of his newfound notoriety, his growing uneasiness as the end of the year draws closer, and his treacherous journey to find the green chapel and face his supernatural opponent.

The film version of The Green Knight follows much the same narrative, though there are some changes that direct the emphasis away from the code of chivalry and toward the question of how one relates to an enchanted world. In this version, Gawain is not yet a knight, though he is still Arthur’s nephew, but is similarly inexperienced with none of the adventures of the other knights or their feats of bravery. Gawain’s status in King Arthur’s court is unclear, most of all to himself, and when the green knight appears on Christmas Day, it is unsurprising that Gawain volunteers. He wants to prove himself to the other knights, but lacks their awareness of the danger that stands before him.

The attempt to control will always result in disaster because the world transcends our grasp, but if we surrender to the mystery by which we live, we may live well, even if it results in losing our head.

The presence of Morgan la Fey, Gawain’s mother, is not incidental to the film (she does not appear in the tale). The film never explicitly names her, but her presence represents the central conflict of the film: how should one respond to the mystery of the cosmos? Morgan is a witch, casting spells to pull cosmological strings to serve her own ends, and she is anti-type to Guinevere, the Christian Queen. We can either try to control these powers and mysteries beyond our grasp through witchcraft and spells, or we can take what we might call a sacramental approach: recognizing that reality, while saturated with meaning and power, cannot be controlled, and we are to prepare ourselves to work within and submit to its order as best we can.

The film is saturated with religious symbolism. When we first meet Arthur and Guinevere, their crowns look like halos—and yet, we encounter a king and queen that are markedly old and tired. Through them, the film poses the question as to whether the Christian foundations of King Arthur’s court are past their prime and whether it is time for a new power to rise. Cue the green knight, who could be interpreted as something like a pagan god, challenging the legitimacy of the Christian king. This same question is raised again as Gawain prepares for his journey; in both the film and the poem, Guinevere gives Gawain a shield adorned with an icon of the Virgin Mary on the inside and a pentangle painted on its face, which Guinevere says represents “the five wounds of Christ and the five joys of Mary.” But the film then adds scenes in which Morgan lays incantations over Gawain, giving him a sash that she tells him is imbued with a magic that will keep him safe so long as he wears it around his waist. With this addition, Lowry seems to be setting up a kind of battle for Gawain’s soul—will Gawain choose the path of witchcraft or that of sacrament?

The cinematography echoes this same battle. Set predominantly in chiaroscuro, the film employs the strong contrasts of cavities of darkness punctuated by blinding light as a way of symbolizing Gawain’s interior struggles. Two other additions to the film further reinforce this theme. The first is a painting by St. Hildegard von Bingen, Cosmos, Body and Soul, to represent the passing of the seasons during the year following Gawain’s beheading of the green knight. The inclusion of the painting cannot be accidental. Hildegard was a mystic and healer, and one who held sacred the power of nature; she is someone who submits to the mysteries of this world because she understands that she belongs to an order that transcends her. The second is Gawain’s encounter with St. Winifred. Decapitated by a suitor in the twelfth century because of her desire to become a nun, a spring is said to have appeared where her head fell. In the film, Winifred asks Gawain to retrieve her head from the spring, and he responds by asking for a favor in exchange. Winifred chastises him: “Why would you ask me that? Why would you ever ask me that?” Winifred’s head belongs with the rest of her body—that is reason enough for Gawain to retrieve it.

Gawain’s journey consists of learning to appreciate the mystery, beauty, and treachery of the world around him, and his last unintended stop is the estate of Lord Bertilak. There he encounters temptation in the form of Lady Bertilak, but here again the film focuses less on Gawain’s honor and more on how he approaches the mystery of the world. Having lost the sash his mother gave to him at the beginning of his journey, Lady Bertilak offers it back to him along with herself, and when Gawain takes it, she declares: “You are no knight.” But while this seems only to be a commentary on his sexual purity, it is more than that: just as knights do not sleep with women who are not their wives, so too do they not hide behind witchcraft and spells: both are against the order of nature.

The conflict seeded throughout the film reaches its apex when Gawain flees the Bertilak estate and finally arrives at the green chapel. There he finds the green knight at rest in the overgrowth of the abandoned chapel: he appears here not as a pagan god, but almost a part of the nature that has overtaken the structure. On Christmas Day, the knight awakens and asks Gawain if he is ready to finish the challenge. With the bewitched sash around his waist, Gawain says yes, but as the knight raises his axe to deliver the blow he runs away. The sash has somehow done its job: no harm has come to Gawain—but at what cost? Gawain returns to Camelot, is knighted, and ascends the throne with his mother at his side. But his reign is fraught with misfortune and destruction. He is not an honorable and brave king, just as he was never an honorable and brave man, and at the end of his life, Gawain removes the sash and dies by decapitation, finally receiving the blow he would have had, had he submitted honorably to the green knight.

And then we realize this was all a vision. Gawain does indeed flinch as the knight raises his axe, but only to ask the giant to wait while he removes the sash with all that it symbolizes. Gawain sets aside every attempt to control nature and use it for one’s own power and ends. Upon removing the sash, Gawain says quietly to himself, “There. Now I’m ready. I’m ready now.” But the green knight embraces Gawain, saying “Well done, my brave knight.” The battle for Gawain’s soul, fought by and for himself, has been won: he will submit to the order and mystery of the cosmos represented by the green knight, rather than try to control it. And for this, he is finally given the titles he most desires: “brave” and “knight.”

The Green Knight deviates from its fourteenth century source in some significant ways, but such that it highlights beautifully a perhaps subtler thesis of the original text: Gawain’s selfhood—as with all of ours—is not simply forged by the individual in a vacuum, but rather consists in how one responds to the order one inhabits. The attempt to control will always result in disaster because the world transcends our grasp, but if we surrender to the mystery by which we live, we may live well, even if it results in losing our head.

Rachel M. Coleman is an Assistant Professor of Theology at Assumption University in Worcester, MA.