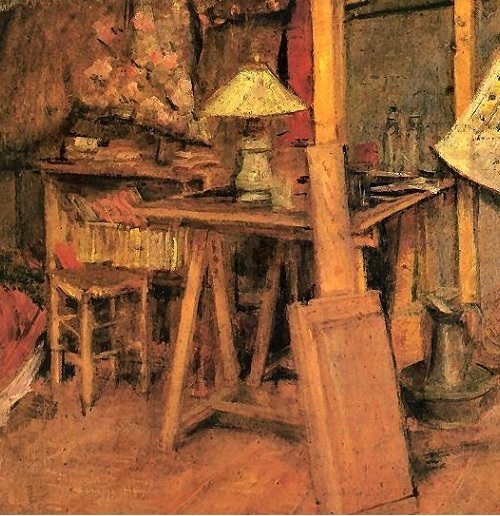 The Lure of the Light Side

The highly anticipated new installment in the Star Wars franchise, The Force Awakens, is, in many ways, a return to the temper of the original trilogy. With the property now in the hands of Disney rather than creator George Lucas, there seems to be an attempt to avoid the memories of the disappointing prequels of ten years ago. Though there are numerous references to the first three beloved films, Jar Jar Binks and the midi-chlorians—indeed any hint of the more recent movies—are entirely absent. Their absence is filled by fun, from stunning, concrete visual effects to the exhilarating thrill of visceral aerial dogfights to—the highlight of the film—Harrison Ford’s delightful reprise of his role as Han Solo.

The Force Awakens does admirable fan service, perhaps too much of it. Director J. J. Abrams certainly brings his own touch to the material: questions abound around the edges of the frame. The political situation after the fall of the Galactic Empire is only dimly hinted at, the backstory of an important artifact is left tantalisingly unsaid, and the audience is left to fill in the blanks about who some of the characters (Max von Sydow’s cameo, for instance) even are. The script is rife with sly humour, and there are plenty of lens flares. Yet sometimes the movie feels more like a reboot—the same elements stitched together in a slightly different way—than a continuation or advancement of the mythology. Hopefully the next episode will feel confident enough to move past the world-destroying-space-weapon-that-must-in-turn-be-destroyed. The universe feels slightly smaller too, in a number of ways. First, there are an awful lot of coincidences that stem from the need to keep the plot moving rather than from a natural convergence of characters. Second, and perhaps more importantly for fans of the franchise, the limitless frontiers of the galaxy seem to have shrunk. The desert planet, the snow planet, the forest planet—they’ve all been seen before. Even the spaceships are limited to slightly tweaked versions of the most popular exemplars from the originals. For all the faults of the prequels—and they are legion—Lucas still pushed the boundaries to present new undiscovered wonders that (usually) felt like they had been in the world all along. That dampened sense of awe doesn’t diminish the fun of The Force Awakens, but it does leave one feeling like Disney and Abrams are playing it safe.

Most intriguing is one subplot that subverts rather than copies the arc of the originals. The principal villain, Kylo Ren (Adam Driver), is a volatile and terribly self-conscious successor to Darth Vader who struggles with temptation. Unlike Anakin and Luke Skywalker, this is not to the Dark Side of the Force, to which he willingly gives assent, but rather to a call from the Light Side. This is obviously a set-up for the wider (presumably redemptive) arc of the forthcoming trilogy, but it begs an interesting question: does prevenient grace operate within the framework of the Force? While somewhat irreverent, the development of this theme might deepen the rather shallow spirituality of the films thus far. At the end of the day, however, the appeal of Star Wars doesn’t lie in the theology of its pseudo-Buddhist pop religion, but in the breathless feeling in the pit of your stomach as you watch the Millenium Falcon weave through the innards of a wrecked Star Destroyer with screaming TIE fighters in hot pursuit. If only to please your inner twelve-year-old, The Force Awakens is worth seeing; but it also tentatively promises to deepen the franchise in a way George Lucas probably never could.