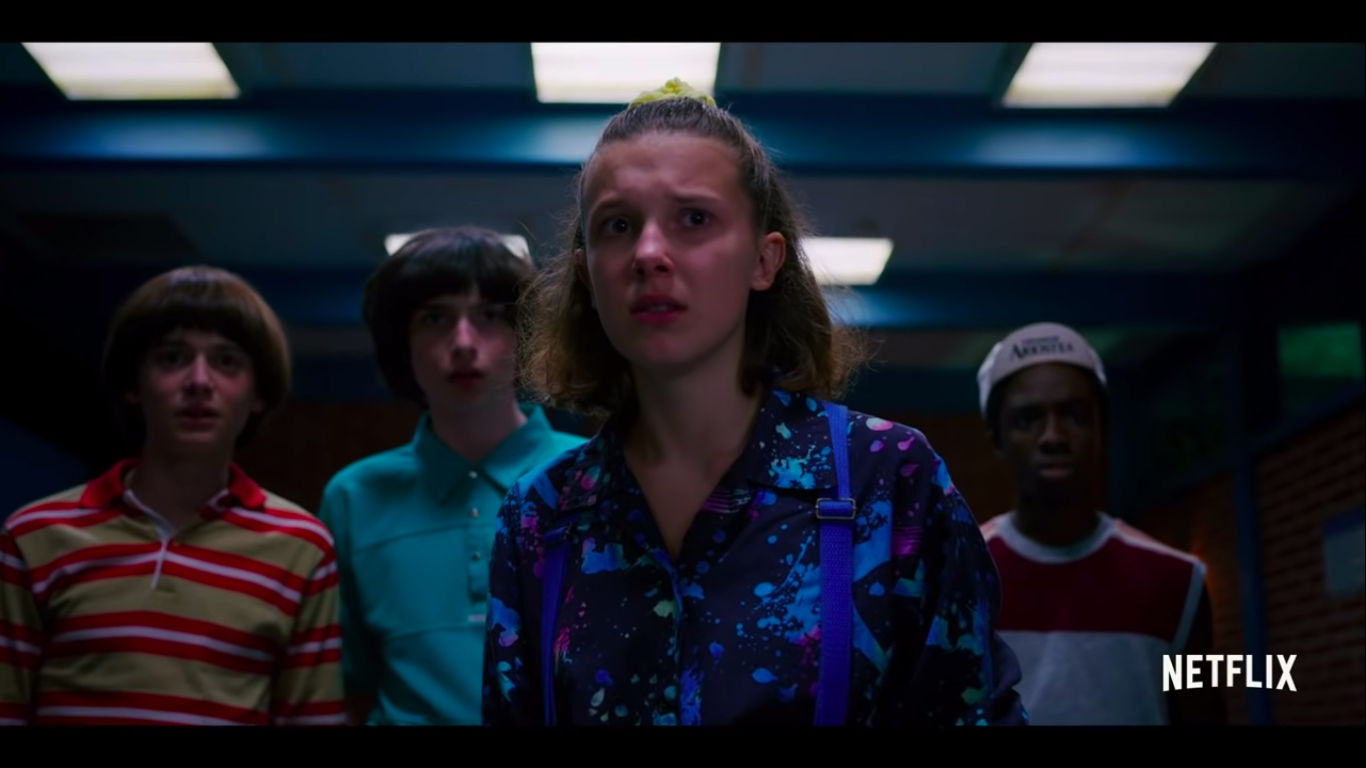 The award-winning original Netflix series, Stranger Things, recently had fans glued to their screens when all eight episodes of Season 3 were released online on the Fourth of July 2019. It has to be said, the series is not for the faint of heart. The cult hit series contains certain nightmarish scenes that are hard to forget, and the third season was particularly heavy on the gore and body horror.

For the uninitiated, Stranger Things is a sci-fi horror-drama set in the small fictional American town of Hawkins, Indiana, in the early ‘80s. The series follows the story of a group of kids around whom strange supernatural events start unfolding, as the result of an illicit science experiment gone wrong. This has torn a rift between worlds and unleashed a powerful evil force from another dimension which the kids call the “Upside Down” (an insight into the nature of evil, right there—but more on this, shortly). Will, one of the children, goes missing without a trace early on in Season 1. Eleven, a mysterious girl with telekinetic powers, escapes from a secret lab nearby and decides to help Will’s friends find him, having realised that she may have been unwittingly involved in his disappearance.

Drawing inspiration from masters of the sci-fi and horror genres like Stephen King, Stephen Spielberg, and John Carpenter, and heavily stylistically influenced by classic ‘80s horror films like A Nightmare on Elm Street, the series is also full of fun references to pop-culture phenomena like Dungeons & Dragons, Star Wars, The Ghost Busters, and more.

For all of its pillow-clenching moments of horror and sweet '80s nostalgia, though, the deeper appeal of Stranger Things lies in its exploration of relationships. In particular, there is the interplay between the masculine and the feminine; also the themes of fatherhood, motherhood, and self-giving love. Ultimately, the show’s heart and humour stops it from being a simple gore-fest, transcending the horror genre to become a powerful story about friendship, redemption, and the victory of good against evil.

Throughout the series, deeply flawed father figures abound. There’s Will’s absent dad, who only shows any interest in the fact that his son is missing when he thinks he might be able to claim some financial compensation. Mr Wheeler, Nancy and Mike’s father, is so passive and disconnected from what’s going on around him that in one scene he is shown literally asleep in an armchair as the action unfolds around him. Dr Brenner, the scientist who separated Eleven from her mother at birth and raised the child in captivity tells her to call him “Papa”. The incongruity of this name is striking, as he subjects her to cruel and dangerous experiments until she escapes at the beginning of Season 1. And then in Season 2 there’s Billy’s dad, whose violence towards his son and his son’s mother provides a hereditary blueprint for toxic masculinity that corrupts his son slowly from the inside out.

Amidst all of these broken families and negative father figures is Joyce Byers, Will’s mother (played brilliantly by Winona Ryder). Her fierce love for her son is the beating heart of the show. Her refusal to give up, even when told by the town’s authorities that they’ve found Will’s body (it turns out to be a fake, which she knows as soon as she sees it), makes her seem crazed at times, even to viewers of the show. At one point, she literally tears a hole in the wall of her house because she hears her son calling to her. In another iconic moment she strings up Christmas lights all over her home because she believes she might be able to communicate with Will through the flickering electricity (the monster at the heart of the drama causes power surges). But ultimately, the intuition that’s guiding her is proved to be right on track, and it is her tenacious love that that galvanises the other characters, and eventually results in her son’s rescue.

One benign father figure who stands in contrast with the other father in Stranger Things is the loveable character of Hopper the town Sheriff; and yet for all that he has a good heart and is genuinely trying his best to protect those he loves, the trauma of losing his biological daughter years previously has taken its toll on him and challenges his ability to rediscover fatherhood as he builds a relationship with, and eventually adopts, Eleven.

Hopper struggles to understand and express his feelings, and his instinct to defend and protect others can at times become controlling and aggressive (he is a cop, after all). He can seem seriously lacking in intuition and empathy; yet his saving grace is his openness to the feminine, which balances and redeems his masculinity just when it’s about to go off course. It’s his interaction with—and trust of—Joyce Byer’s heroic mother nature that draws out his best self: when he’s listening to her and working with her to save the kids and the town of Hawkins, he emerges as a truly heroic father figure.

Eleven, with her telekinetic powers that can explode the brains of her attackers and throw a van through the air, embodies both strength and softness. Like any child, she craves love and belonging, and has an innate sense of justice and mercy that keeps her powers and potential for violence in check. The more typically feminine aspects of her personality, for example her empathy, enhance her strength and heroism.

In the final episode of Season 3 of Stranger Things, at the critical moment when Billy (having committed so many unthinkable atrocities by this point) is about to offer Eleven to the monster, we get another powerful example of the deep meaning of motherhood. Tears streaming down her face, Eleven helps him to reconnect with a memory of his mother from when he was a child. This is a conversion moment: Billy finds the strength to withstand the evil that’s possessing him by turning away from the violence modelled to him by his father and embracing the powerful life-giving love of his mother instead. The memory of his mother reminds him of his true nature, enabling him to die a hero as he sacrifices himself to save Eleven and her friends.

While there are plot weaknesses around Billy (for example, underdeveloped characterisation of his relationship with his step-sister Max), this contact is typical of the better moments of the series: two characters revealing the great psychological depth and complexity of the other as they interact. Eleven is an interesting combination of damage and redemption: it is her anger, magnified by her psycho-kinetic abilities, that opens up the gateway to the terrifying Upside Down in the first place. It is her emerging ability to love which then repairs it, against all the odds.

In Stranger Things, evil (and specifically, the monster that the kids call “the Mind Flayer”) is portrayed as being a destructive force that consumes with a never-ending appetite, seeking to absorb everything in its path into one amorphous mass. While powerful and terrifying, the fact that a group of kids and teenagers can resist and eventually outwit it suggests that childlike imagination and the power of love and friendship are ultimately stronger forces than they might seem. Nowhere is this more evident than in the scene near the end of Season 3 where two of the kids sing a duet from The Never Ending Story right when everything seems to be falling apart, and a giant gelatinous monster chases a carful of the kids down the road.

When Will is possessed by the Mind Flayer in Season 2, his inherently good nature enables him to resist the evil that’s using his body and mind just enough to communicate with his loved ones, and Billy’s moment of redemption at the end of Season 3 confirms that no matter how irresistible the forces of darkness might seem, we always have a choice to fight it. In this sense, Stranger Things can be read as an interesting commentary on our culture’s blind participation in mindless mass consumption, and the destruction of our environment and vulnerable human life. The idea of an army of zombies following the commands of one central “hive mind” lends itself to metaphors about group pathologies, but as Will and Billy both demonstrate in their own ways, we do contain enough strength within ourselves to put up a fight.

Stranger Things is ultimately a study in love and relationships in all their messy brokenness, and an exploration of the things that make us human and differentiate us from the forces of evil, portrayed in the series as coming from a Dantesque place of utter coldness. The worst characters, ripe for “harvesting” by the forces of darkness, are all people who are essentially hard of heart in the first place. It is the spirit of childhood, shot through with hope and seemingly naive solidarity with the weak and the socially rejected, that wins out against seemingly insuperable forces of destruction—song, geeky ingenuity, fireworks, even a simple slingshot—all prove to be weapons of David against a horrifying Goliath.

While we contain the potential for that evil within us, it’s only ever a distortion or destruction of the good that is our true nature. Throughout the show, we see the best and the worst sides of human nature, but when masculine bravado and feminine insight work together in harmony (whether in individual characters or in the balancing of the two forces within one character), the light prevails and true human heroism emerges.

Sophie Caldecott is a freelance writer, and SEO teacher. She can be found at https://sophiecaldecott.com