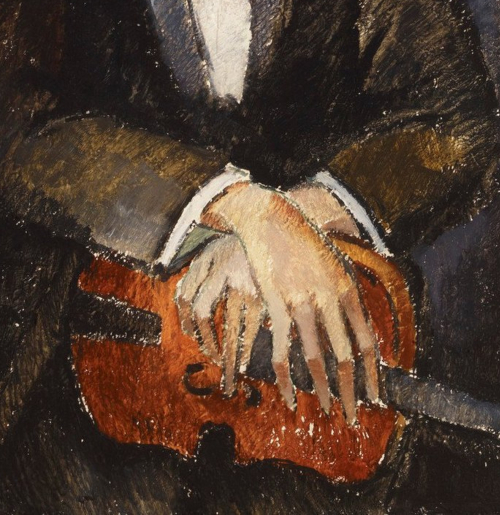 Music: The Art of Time

Music is an unfolding of time. Indeed, music is an art uniquely suited to the exploration of time. We experience time not as a series of disparate moments, loosely joined together by circumstance, but as a revealing, a gathering of life and knowledge together into an anticipable, symphonic whole. Through the unveiling of their music, composers uniquely speak to the mystery of our being in process, of our being accompanied in the movement toward an ultimate end.

Whenever a key change is heard, such as in the final chorus of The Beatles’ “Penny Lane,” or whenever rhythm evolves, as in the shift from verse to chorus in “Lucy In the Sky With Diamonds,” a musical process is at work. Music employs many such processes, and these are especially important in pieces of music without lyrics. Processes like harmonic progression, rhythmic sequence, tempo modulation, and timbral association give integrity to music that does not rely on words to give explicit meaning. They give composers the necessary creative boundaries to shape their works into coherent wholes.

For most of music history, the most important process employed by composers was harmony, and a harmonic teleology was often used to direct compositions towards a desired end. This orientation is clearly present in the most popular musical form of the Classical period: the Sonata-allegro form, whose drama and interest lie in the tension (and resolution) between the two different keys of the initial themes. The famous, dramatic opening of Beethoven’s Symphony No. 5, Op. 67, for instance, is in C minor, but is then contrasted with a gentler second theme in E-flat major. The aim of this tension is its eventual resolution at the end of the movement, when the second theme is presented again but now in the key of the first. In this case, a harmonic teleology or “process” is employed as a formal structure that orients the development of the work toward a resolution, revealing to the listener something of the hidden reality of our world: that individual moments and movements of expression are endowed with accord, purpose, and weight, on account of their shared orientation towards an ultimate goal.

Genuine change is impossible without orientation or telos, since in any instance of real change—whenever a thing undergoes a “becoming”—there is always a presence, an accompanying end, even if only faintly grasped.

Johann Sebastian Bach (1685‒1750) had a supremely teleological vision of music. His fugues, in particular, exhibit a strict adherence to the fugal form, where a delicate interplay of rhythmic and harmonic development between successive voices works in service of a uniform theme. But it is only his appreciation for the process of fugal music that allows a unique expressiveness to arise from within this convention. Each musical moment is something to be savored, even as each movement points toward something that is yet to arrive. In works like the powerful E Major Fugue, BWV 878, the fugal form sets the boundaries, but it is from within these bounds that Bach’s artistic virtue and creativity become most apparent. There is a playfulness and gratuity in the way his music unfolds from inside a given form. Bach understood that while robotically following formulaic musical patterns may serve to hone compositional skill, such works fail to disclose reality as true art is meant to do. Yet, at the same time, Bach was also aware that the mere free creative play of notes without orientation is equally incapable of fulfilling music’s inherent longing for revelation. Genuine change is impossible without orientation or telos, since in any instance of real change—whenever a thing undergoes a “becoming”—there is always a presence, an accompanying end, even if only faintly grasped.

Unfortunately, Bach is a unique case. He not only understood the importance of balancing what things are with what they become, but he also possessed the musical genius to express this mystery. Whenever a composer fails to preserve this balance, music loses its revelatory power.

The turn of the twentieth century saw a movement away from harmonic processes as non-harmonic processes rose in importance. One such example is the “twelve-tone” method of composition introduced by the Austrian composer Arnold Schoenberg (1874‒1941). In this method, the 12 pitches from C to B are each given a numerical label from 0 to 11 (C is 0, C# is 1, D is 2, etc.), producing melodies and harmonies organized not by pitch names or chord progressions, but rather by mathematical relationships. Because this is a non-harmonic method of musical orientation, the harmonic tension hitherto at the heart of music history is completely dissolved: in Schoenberg’s system a major chord and a minor chord are mathematically the same, as both are reducible to a mathematical set of pitches (i.e., 0, 3, 7).

Though Schoenberg founded this method, it was Anton Webern (1883‒1945) who produced the most striking and strictly adherent early works in this style. His Symphony, Op. 21 (1927‒28) and Variations for Piano, Op. 27 (1936) are pieces of crystalline beauty. All melodic and harmonic material yields to the unfolding of the twelve-tone method, resulting in works of sparse—but highly intentional—textures, and organization more compact than any music before or since.

From an experiential point of view, the listener does not experience the processes by which Webern’s music runs, but only the results of these processes. One could, of course, examine the score afterwards and study the “twelve-tone” method used to produce the music. But the lack of perceptible teleology upends our experience of time and the world. Even the most cursory consideration of the new “moralism” plaguing contemporary culture indicates a prevalent lack of concern about our ultimate end, which suffocates empathy and leaves our present age in a place where immediate indictment, both of works of art and of human lives, is omnipresent. Webern and Schoenberg are, of course, not the authors of these modern trends but their music reinforces them.

On the other side of the spectrum, the American composer Steve Reich (b. 1936) devoted much of his early work to making musical processes perceptible once again to the listener. In works such as Piano Phase and Violin Phase (1967), the process of the music is, in fact, all that matters. As Reich explains: “What I’m interested in is a compositional process and a sounding music that are one and the same thing.”[1]

In Reich’s early works, the process he employs is quite transparent. Two voices begin in sync with one another playing a single melody and then slowly grow rhythmically apart. A tension is created from the moment that the instruments drop out of sync, and, over the course of the piece, the tension builds until the out-of-sync interactions form a new melody. Then that melody drops away as the lines once again phase past each other, and this process continues until the voices are eventually reunited, as at the beginning, so as to create a cyclic form.

Yet, there is something of a musical legalism present in Reich’s early works as he almost robotically follows a Webern-like level of strictness out of obedience to the idea of the process itself. While there is some craftmanship involved in the intriguing melodies Reich develops as the process of his music unfolds, he nonetheless sacrifices a great deal in order to preserve the priority of the work’s progression. In many ways, these early works feel less like pieces of music and more like scientific experiments. Over-emphasizing teleology is just as damaging to our experience of time as under-emphasizing it (as Webern does). As a result, in Reich’s early works, there is something of the joy and playfulness of the human spirit that is greatly lacking. Music in which individual moments do not ultimately matter becomes zombie-like, exhibiting a mindless following of rules or the total capitulation of expressions to inescapable impulses.

However, many of Reich’s later works recognize this deficiency and do a better job of balancing temporal permanence and development in a way that is strikingly beautiful. The phasing in works such as his Duet (1994) for two violins and string ensemble unfolds with carefully crafted melodic lines and harmonies. The process is still perceptible, but the music is not merely a math problem or a computer program. The process is properly understood as being enlightening rather than oppressing. The progression of the music works to reveal each moment as it truly is, endowing it with weight and beauty. By engaging with harmony as well as with his phase process, Reich does not abandon tradition. If music truly is the art of time, then composers need to allow time and its accumulated tradition to guide their hands. Reich brings innovation into a fruitful dialogue with tradition, and tradition does not stifle or impede creativity, but rather creates the space for musical flourishing.

Conner David McCain is a New York-based composer and a PhD Candidate in Music Composition at the University of Aberdeen. He holds an MMus from the Catholic University of America in Washington, D.C. and an MA in Philosophy from the University of St. Andrews in St. Andrews, Scotland. As a composer, his works have been performed all over the world, and he has participated in festivals and masterclasses in Italy, Scotland, and across the United States. He and his wife live in the beautiful Hudson Valley where he is active as an organist and church music director.