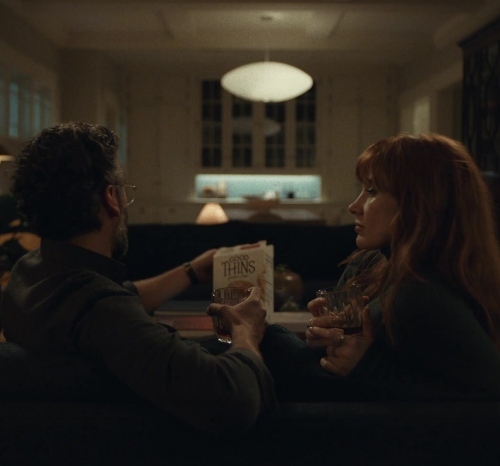 Challenging the Platform of Risk-Free Marriage

Reviews of HBO’s 2021 remake of Ingmar Bergman’s Scenes from a Marriage have been lukewarm. While heaping praise on Jessica Chastain and Oscar Isaac—whose chemistry as a couple can make even divorce seem enviable—critics have questioned whether the five-part miniseries, created and directed by Hagai Levi, really adds anything to our understanding of marriage in modern life. As critics note, the “divorce plot” or “brutal marriage movie” has become cliché, even to the point of a SNL parody. Compared to when the original debuted in 1973, today divorce has lost much of its taboo. The institution of marriage, with its so-called “heteronormative” and “patriarchal” connotations, has already suffered its death by a thousand blows. Why then, the critics ask, should we spend five hours watching the dissolution of yet another marriage when we already know the moral of the story?

But could there be something the critics are missing? If you take for granted that marriage defined by monogamy, common property, and child rearing is doomed, then Scenes is just another dispiriting divorce plot. It is a tragedy where catharsis comes in the form of psychotherapy, polyamory, and something called “elective co-parenting.” However, if you take a different view of marriage—a view of marriage as an answer to a desire for unity rather than a supplement to individualism—then a more nuanced (and less depressing) interpretation of Scenes from a Marriage is possible.

Jonathan and Mira’s authentic and noble desires for love, companionship, and children are evident throughout the series. What they fail to accept is that these great desires will never be satisfied when their model for marriage is based on autonomy.

The first of the five episodes opens with Jonathan (Oscar Isaac) and Mira (Jessica Chastain) sitting in their Boston colonial giving an interview to a graduate student researching gender dynamics in modern marriages. This interview gives us a pithy summary of their characters. Jonathan is a hyper-conscientious philosophy professor with a conflicted relationship to his orthodox Jewish upbringing. Mira is a formerly fun-loving tech VP who is already cracking under the pressure of society’s conflicting expectations regarding career and family life. During the interview, their five-year-old daughter Ava—whom they both adore—sits in the other room watching educational cartoons on an iPad.

After establishing the biographical basics, the interviewer gets to her core question. Now that they have been married for ten years—slightly longer than the statistical average—what would they say has made their marriage successful? Jonathan is nettled by this notion of “success” and accuses the interviewer of perpetuating a cultural misconception. A “successful” marriage is an illusion that sets people up for disappointment. The reason their marriage has lasted, Jonathan submits, is that they are not deceived by this illusion: “We both see marriage as a means, not an end. . . . As a platform that helps us develop as individuals.”

Jonathan and Mira’s “platform” is an archetype of the modern secular marriage. It is based on the recognition that marriage provides certain goods—such as intimacy and stability—that cannot be obtained through more casual sexual relationships. Yet the platform aims to avoid those aspects of marriage that many people now view as oppressive, such as prescribed gender roles or “unrealistic” demands regarding fidelity. While at one time marriage might have provided a relatively fixed set of expectations, the modern platform is flexible and “natural”—a form of advanced co-habitation for upper-middle class professionals. What Jonathan and Mira discover, however—and what the critics miss—is that this flexible framework comes with a cost. By sticking to the individualist ethic of the platform, Jonathan and Mira deprive themselves of the tools necessary to achieve what they in fact desire even more than their own individual flourishing: unity in their marriage.

We begin to see how the platform impedes unity when Mira reveals that she is pregnant. Neither she nor Jonathan knows how to react to this news, and they seem to look to the other for the answer. Though Jonathan is excited about the possibility of having another child—he is happy being a quasi-stay-at-home dad and thinks Ava would benefit from having a sibling—he refrains from unequivocally asserting that this is what he wants. After all, the burdens of pregnancy will affect Mira’s individual flourishing more than his own. He is afraid to make any appeal to “us” and so must defer to what Mira thinks would be best for her.

Yet an unequivocal assertion about what is best for “us” is what Mira seems to want. Though she expresses some fear about having another child, her hesitancy could also be interpreted as a desire for Jonathan to be confident and assertive, a desire for him to convince her that raising another child is a challenge they could face together. But Jonathan dutifully follows the ethic of autonomy. He promises that he will “support her decision no matter what,” thereby leaving her to face the moral weight of that decision alone. Unsurprisingly, Mira chooses to end her pregnancy.

The abortion propels the drama of the next four episodes. Mira, trapped in a passionless marriage, has an affair. But unlike the original series, where the adulterous husband seems indifferent toward his children, Mira is as desperate to be close to Ava as she is to escape her marriage with Jonathan. Following the disclosure of the affair, she cycles through feelings of defiance, desperation, and shame. Her actions appear irrational—at times, even deranged. As the one who betrayed the marriage, Mira is initially less sympathetic, and could easily come across as callous. But Chastain keeps us convinced of Mira’s humanity. Her performance allows us to see behind the mania to the wounded soul of a woman who knows she has paid dearly for her independence.

In the penultimate episode, the divorce papers are ready to be signed. Jonathan is eager to get it over with, but Mira is hesitant. She has an innate attachment to her marriage and cannot fathom that, by initialing a few dozen documents, this attachment can be dissolved. At one point, she suggests that perhaps their marriage could still be saved. Jonathan, however, has become insensate through the ritual scourging of therapy and self-examination. Rather than risk the intimacy of marriage, where abandonment and betrayal are always a real threat, he decides to secure what he enjoys most—raising children—through a more stable, arms-length arrangement. He tells Mira he has decided to adopt a child with one of his colleagues, who will be his “elective co-parent.” When Mira asks if he would ever consider having another child with her, he says, “no, never.”

For the critics, Jonathan and Mira’s predicament is the inevitable result of our competing cravings for intimacy and independence. Marriage only makes this predicament more complicated by ladening our desires with jealousy and the ache of betrayal. The answer, then, is to abandon marriage altogether. What the critics don’t see, however, is that the problem with Jonathan and Mira’s marriage is not that it is burdened by outdated notions or irreconcilable desires. Rather, the problem is that the platform doesn’t demand enough. Jonathan and Mira’s authentic and noble desires for love, companionship, and children are evident throughout the series. What they fail to accept is that these great desires will never be satisfied when their model for marriage is based on autonomy. The tragedy of Scenes, then, is not that marriage is inescapably flawed. It’s that marriage is the solution, but Jonathan and Mira fail to grasp it.

Tim Borgerson is a recent graduate of Notre Dame Law School and is currently based in San Francisco, CA.