Barron, Bishop Robert, Letter to A Suffering Church: A Bishop Speaks on the Sexual Abuse Crisis (Word on Fire, 2019).

The sexual abuse crisis that has unfolded in recent years within the Church in the United States and around the world has caused a grave wound. Believers and non-believers alike have been, in turn, shocked, disgusted, angered, and saddened by the actions of abusive clergy and the repeated failure of Church leaders to protect vulnerable children, to punish the offenders, and to remove them from ministry. The word Bishop Robert Barron uses to speak of this wound is “lacerating,” and it is fitting, for it is a wound that cuts deeply to the core of the Church’s mission and identity.

Much has been written about the scope and causes of the abuse crisis, and many proposals have been made for reforming the structures that enabled such behavior to continue undetected and undeterred for years. However, few have spoken with such empathy and directness as Bishop Barron does in his Letter to a Suffering Church. This short book is truly a pastoral one in which Barron speaks from the heart and not, as so many bishops have, through the mediation of lawyers and public relations consultants. It is a “cri de coeur, a cry from the heart,” addressed to those who would shake the dust from their feet and walk away from the Church in despair. Who could blame them after so much pain, deceit, and obfuscation? And yet, there is a compelling reason to stay and fight, Barron insists, because the Church is the bearer of a precious treasure, albeit one carried in fragile earthen vessels.

Barron describes the abuse of minors by clergy as the devil’s masterpiece. It has caused untold suffering and tremendous human devastation, especially because the perpetrators of these acts of violence were God’s ministers. Those who represent the goodness and mercy of God by virtue of being conformed to Christ through the sacrament of holy orders brought instead harm and pain, and those who were given a sacred mandate to guard the flock were complacent and complicit. As a pastor, Barron has heard the cries of the faithful: “In their bitter words and their even more bitter tears, I would sense both a deep love for the Church and a practically bottomless disillusionment with it” (13).

How are we to find our bearings and come to some understanding of this crisis in order to find a way forward? Barron’s analysis takes a two-pronged approach: he first looks at the sexual abuse crisis in the light of Scripture and then examines it historically. Even as the Bible affirms a covenantal and life-giving vision of human love and sexuality, it also depicts sex after the Fall as an instrument of “domination or manipulation;” when it is distorted, “sexuality becomes a vivid countersign of the divine” (20). Among the passages that Barron highlights, two stand out in particular: Eli, the high priest, failed to act against his sons Hophni and Phineas, whose corruption included sexually abusing the women who worked at the meeting tent, and David used his kingly power to cover up his affair with Bathsheba. In both cases, disregard for God’s law brought punishment and destruction. In contrast to these icons of abuse, Barron upholds Jesus’ own relation to children (see Mt 18): “the child—humble, simple, self-effacing—functions as a sort of iconic representation of the divine Child of the divine Father” (35). In fact, Jesus’ harshest words are directed to those who would cause harm to children.

When Barron turns to the history of the Church for insight, he draws two significant conclusions. First, the Church has always contended with evil in its midst. “The Church, from the very beginning and at every point in its development,” Barron writes, “has been marked to varying degrees by sin, scandal, stupidity, misbehavior, misfortune, and wickedness” (41). Indeed, some of the most eloquent passages from the letters of St. Paul were occasioned by the immorality and abuse present within the community of believers. Familiarity with the history of the Church reveals many instances of poor clerical discipline and a long list of corrupt and sinful popes, some of whom Barron describes in detail. “We’ve been here before,” he observes. Not only has the Church survived numerous examples of scandal, but more importantly, the Church’s own history reveals that the holiness of the Church is the holiness of Christ. For this reason, the Second Vatican Council spoke of the Church as a mixed body, “at once holy and always in need of purification,” whose continual path is that of penance and renewal (Lumen Gentium, 8). The second lesson from Church history that Barron draws is that alongside the scoundrels and sinners, the Church has also nurtured many strong voices who have opposed the corruption and laxity of ecclesiastical leaders (think here of Peter Damian, Dante, Chaucer, and Erasmus) and, most importantly, produced many saints whose holiness reflects God’s beauty and glory. Barron eloquently invokes these holy women and men as shining lights in the Church’s history. On this note, I would draw the reader’s attention to the weekly general audiences of Pope Benedict XVI, which I always understood to be part of his pastoral response to the sexual abuse crisis.[1] In 170 addresses delivered between March 2006 and April 2011, he chronicled the unfolding of sanctity in the lives of the great saints and theologians of the Church in an effort to show “how it is precisely the light of the [Face of Christ] that is reflected on the face of the Church (cf. Lumen Gentium, n. 1), notwithstanding the limits and shadows of our fragile and sinful humanity.”[2]

For Barron, the reason we need to stay in the Church is that it remains the place of encounter between our wounded humanity and the life-giving love of the Triune God, who in the death and resurrection of Jesus Christ has reconciled the world to himself and overcome all suffering and abuse. The Church offers us the sacraments, especially the Eucharist, and calls each of us to grow in holiness. Institutional reforms such as the Dallas Charter can only go so far; it is the spiritual reform of holiness that will reinvigorate both the priesthood and the laity and thus ultimately heal the wound caused by abuse. “If we want holier priests,” Barron insists, “we all have to become holier ourselves.” What the Church needs most of all is a new St. Benedict, a new St. Francis, and a new St. Ignatius. These, he believes, are already being fashioned by the Holy Spirit within the bosom of the Church.

[1] For an overview of these general audiences, see my article “Holiness and the History of the Church in Benedict XVI’s General Audiences,” Logos: A Journal of Catholic Thought and Culture 17:3 (Summer 2014): 158‒73.

Louis Rouleau holds a Ph.D. in Historical Theology from The Catholic University of America. He writes from Edmonton, Alberta. 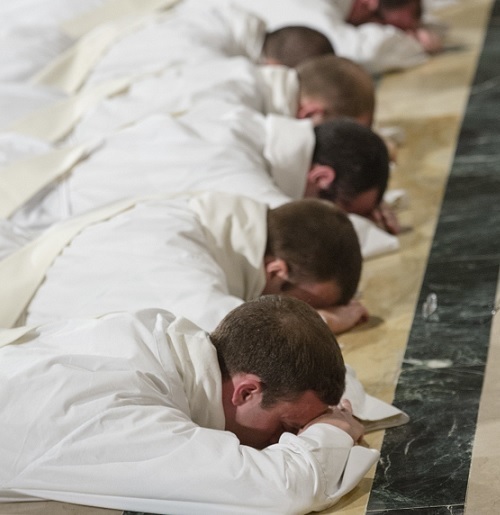