In the late 1990s, Jeffrey Jensen Arnett, psychology professor at Clark University, asked a group of young adults a simple question: “Are you an adult?” The ambiguity in the answers given by the 18- to 25-year-olds in his research study made Jensen Arnett realize that something new was afoot. These were clearly no longer adolescents, yet they did not perceive themselves as adults either. These young adults, who ranged in age from the late teens to the late twenties, were in a transitional phase, Jensen Arnett decided. He dubbed it “emerging adulthood.”

Jensen Arnett’s idea is not without its critics, but few would disagree that cultural trends in industrialized countries do conspire to make for a longer, messier transition to adulthood. Young people spend more years in school, acquire more debt, marry and have children later in life (if at all). While these “in-between” years can be a time of breathless exploration, they are also filled, more often than not, with a painful sense of unfulfilled searching. (Elizabeth McCarthy writes beautifully about this experience of “being on the cusp” in this issue’s witness piece.)

What is even more interesting than the concept of emerging adulthood, however, is that there is so little clarity about when it ends. When are you no longer “emerging,” but a full-fledged grown-up?

The question defies a simple answer of chronological age, as state-dictated indicators of maturity prove to be inconsistent, even arbitrary. You can vote at 18, unless you live in Scotland or Brazil when you can do so at 16, or South Korea, where it is 19. In the US you may get married at 18, but this drops to 16 if your parents give permission. You can purchase a beer at 21, unless you’re in the UK or Quebec, when you may do so at 18. If you are in Germany it is 16, if you are in Ontario it is 19.

Biological realities, too, elude firm definitions, writes Julie Beck in The Atlantic. Puberty ends anywhere in the early to mid-teens; the collarbone—the last bone of the skeleton to stop growing—reaches its full size anywhere between 25 and 35 years of age; the development of the prefrontal cortex of the brain isn’t completed until the age of 25. There are no clear-cut measures to be found here either.

A troubling new trend suggests that instead of being an adult, it is sufficient to “adult” when necessary—that is, to undertake the things that responsible adults do: pay the bills, clean one’s apartment, control one’s temper, etc. Once the often unpleasant tasks have been accomplished, the role of adult can be cast aside, to be reassumed at a later time. By this logic, however, one could go through life without ever reaching adulthood per se, without giving up “childish ways”, as St. Paul suggests we must when we mature (cf. 1 Cor 13:11). Acting responsibly, though important, is not therefore definitive when we are speaking of adulthood.

As so often on the Christian journey, the beginnings of an answer to our question can only be discerned when the gaze shifts from the “I” (what I have to do to become independent) to the “thou” and, eventually, the “Thou.” Adulthood means no longer having the self as one’s sole focus. The ability to put the other first, selflessly, if not without effort, may be a more defining trait of human maturity. “Now [as one matures] the person is able to give himself to the other,” Fr. Jose Granados tells us, “to abandon the sphere of the isolated individual around which the feelings tend to circle…in such a way that the individual is no longer the center of the relationship but lives…out of himself and, only in this way, becomes fully himself.”

Navigating human relationships—as children, parents, spouses, friends—is part and parcel of being an adult. This can be painful in the case of family relationships, as Laura Bramon reminds us. Despite all risk, however, we long for relationship and, increasingly often, resort to technology to find and mitigate it. Friendship and social status, for example, are often the reasons why young men spend so much time and effort in playing video games, as Karl MacMillan explains in his review of a popular science fiction novel. We also turn to technology—the smartphone “robots” in our back pockets—because we want to feel more connected to friends through social media, often at the price of neglecting those who are right beside us and our relationship with God himself. Our “disenchanted and hyper-technologized age,” relates Dawn Eden Goldstein, is marked by the vice of acedia—we become weary, slothful, joyless. We want to accomplish more, often by means of the virtual realm, but end up being diminished in our humanity.

Two books reviewed in this issue—one by Greg Lukianoff and Jonathan Haidt, and another by Ben Sasse—make the claim that the same pattern holds for our societal treatment of young people. We try to protect them more—allow them to be babysat by screens, provide “safe spaces,” medicate them liberally—but end up diminishing their humanity and undermining their resilience. Sasse warns that the result is a dramatic coming-of-age crisis, leaving emerging adults unable to make the final leap to adulthood.

In a clear and definitive tone, the Baltimore Catechism tells us that God made us to know Him, love Him, and serve Him in this world; and to be happy with Him forever in the next. If this is our intended telos, then surely human maturity—that is, adulthood—must take up the tasks of knowing, loving and serving God in a way that corresponds to a given individual’s abilities and situation. And when carried out perfectly, these tasks—this full flowering of humanity—become holiness. This is why we have chosen Bl. Pier Giorgio Frassati as the “model adult” for this issue. Only 24 years old at the time of his death, Pier Giorgio falls squarely into Jensen Arnett’s “emerging adult” bracket. And yet here was a man who lived for others, having drawn his strength from Christ, having achieved, as a young adult, a maturity most of us can only dream of. 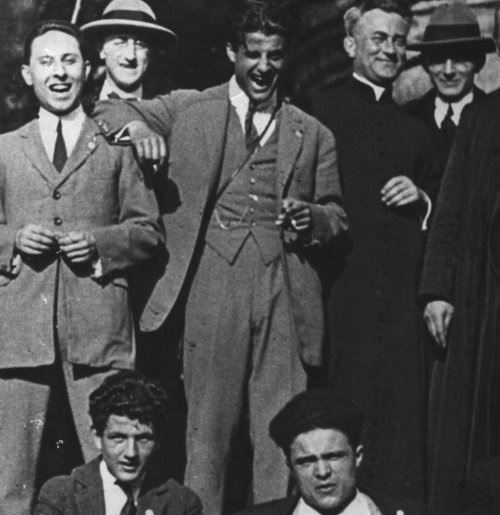